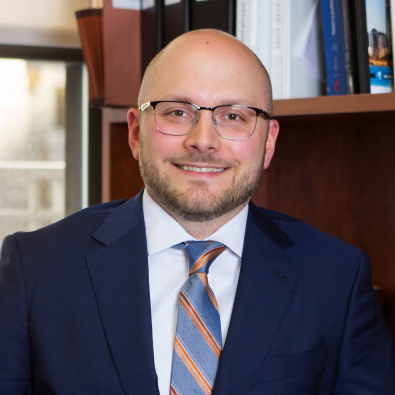 Greg Papeika has been an associate with Ditchik & Ditchik since 2016.  Greg was admitted to the Connecticut bar in 2007 and New York bar in 2008.  Born in Brooklyn, New York, he attended Washington & Lee University (B.A. magna cum laude, 2004), New York University (M.S., 2016), and the University of Connecticut School of Law (J.D. with highest honors, 2007). In law school, he served as an Articles Editor for the Connecticut Law Review and interned for United States Magistrate Judge Holly B. Fitzsimmons (D. Conn.).  Following graduation from law school, Greg moved to New York City and became an associate at Shearman & Sterling and later Milbank, Tweed, Hadley & McCloy, practicing primarily in the area of bankruptcy and financial restructuring for several years.  After returning to school to study real estate and hotel finance, he joined Ditchik & Ditchik and has been practicing in the area of tax certiorari ever since.

Greg lives in Connecticut with his wife and dog.  He is a morning person who drinks his coffee black with no sweetener.  In his spare time, he likes to plan and carry out complicated home improvement and backyard projects with varying degrees of success, read factual and fictional books on history, research random minutia, and play golf.  He is also a true-crime podcast enthusiast, amateur birder, train buff, occasional hiker, and a proud member of the Benevolent and Protective Order of Elks.